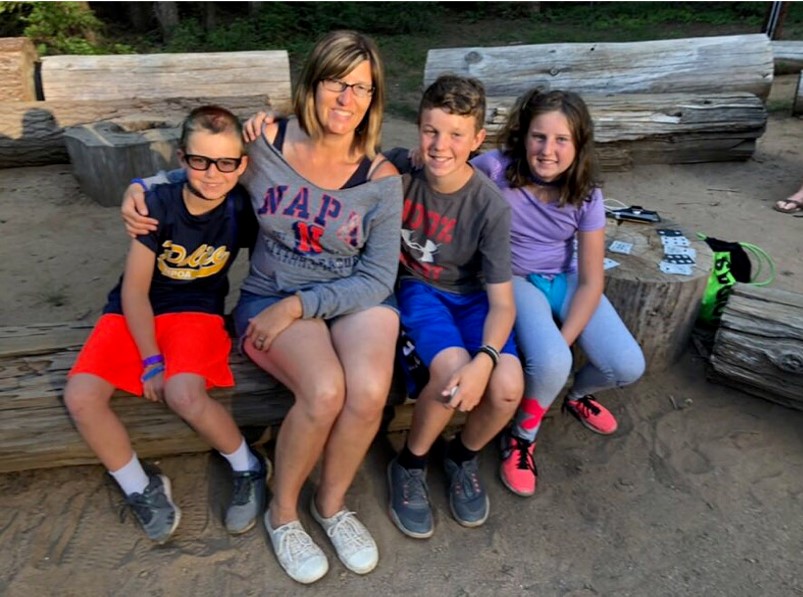 I am Michelle. I have three amazing children: Jack is 12, Natalie is 10, and Peter is 8. Since type 1 diabetes first touched our lives, we have each learned to cope with it in our own unique way. We are one family with four unique type 1 experiences.

In March of 2016 I did a google search that changed our lives forever. I searched, “frequent urination in boys.” The google search led to an appointment with the pediatrician the next morning and by afternoon we were at CPMC in San Francisco.

It was a whirlwind experience. I was freaking out, to put it mildly,  but I put on a brave face. I didn’t want Jack to be scared. I didn’t want him to know that I was scared. I didn’t want him to worry. I wanted to carry that worry for him. I wanted to show him that our life would remain the same, except that we would now count carbs and give insulin. There would still be school and friends and baseball. His life would not change all that much. In saying that, I realized that my life was going to change considerably.

Jack had a huge desire to be a part of his diabetes care. He didn’t want the nurse to poke his finger to check his blood sugar, he wanted to do it.  At 8 years old, my third grader gave his own shots, helped to count carbs, and seemed to take his diabetes diagnosis in stride. Except for one thing; he didn’t want me to tell anyone that he had type 1. I argued that I would have to tell adults, specifically those that care for him at school and his coaches; but telling his friends was his decision. It was very clear from the start that Jack was going to be in charge of his diabetes.

A month later we were at the Endocrinologist.  I brought all the kids with me because we’re all in this together. We need to ALL show Jack our support and we ALL need to learn about diabetes. Picture my then 4, 6, and 8 year old’s all in the small examination room poking each other and testing their mother’s patience.

The doctor asked Jack how it was going at school and he replied,“It’s fine.” And it was fine. I  mentioned to the doctor that Jack didn’t want to tell his friends about his diagnosis. It was then that the doctor gave me a DYF flyer. Jack’s eyes lit up at the idea of Family Camp. So it looked like we were headed to camp that summer!

It was at this appointment the doctor suggest I test the other two kids to determine if they were likely to develop type 1 as well. As we headed to the lab, Natalie and Peter began asking, “Will I get diabetes, too?” These questions were soon overtaken by camp excitement and, from then on, all the kids could talk about was camp. They were counting down the days. The boys were beyond excited, I was excited for Jack to have this experience, and Natalie was in a complete panic about the “open air deck”.

We arrived at Bearskin Meadow Family Camp just 4 months into Jack’s diagnosis.  For 6 days, my kids smiled from ear to ear. They got up every morning dancing to the tunes blasted over the speaker at 7:00 am and collapsed in bed each night under the stars. The “open air deck” proved to be a winner with Natalie. I watched at meals as Jack and his new found “camp best friends” huddled around a table as Jack checked his blood sugar and gave himself a shot. It appeared there were no secrets with these friends.

Natalie and Peter loved to tell me which kids in their group had diabetes and which did not. They loved sharing about how they gave themselves an “air shot” in their groups and Natalie was particularly interested in trying all the different options of low supplies. I remember her asking me, “Where can we buy sugar cubes? Those would be really good for Jack.”

Those 6 days were full of valuable education for me. There were a variety of speakers from the medical field and plenty of valuable discussions among parents. I quickly bonded with other parents through tears and shared experiences. Now we see our “camp friends” throughout the year. They are the only people I can text at 2:00 am because they too are up treating stubborn lows.

The most valuable take-aways that summer (and to date) came from two very wise women, the camp doctor and the camp director. To them I am forever grateful because what they shared has become the daily mantra in our home.  This is what they said:

These small words of wisdom might not seem like much, but when you are in the daily trenches of caring for someone with diabetes they can really put things into perspective. I repeat these words daily to the kids and they play in my head like a broken record.

The week came to an end and I had to drag my kids to the car. All three of them cried the entire drive down the mountain. They did not want to leave camp. After an hour of crying they finally stopped. They dried their tears and the conversation changed, “Can we go to camp next year, mom?” I responded, “Of course we can.” And we’ve gone every year since.

I asked Jack what he liked about camp. He said, “Everything!” Most importantly, he likes that nobody asks him about diabetes. He doesn’t have to explain what it is or why he has to have a shot. It’s not weird to have diabetes. Everybody has diabetes. It was as simple as that. He’d found his people.

We returned home from camp to a Dexcom in the mailbox and a phone call breaking the news that the blood tests had returned and Natalie had 2 out of the 5 auto-antibodies for type 1. After a mini meltdown,  I told myself, “If Natalie ends up with type 1, at least I already know what to do!” I couldn’t let myself get stressed out about what might happen. After all, it wasn’t a guarantee. At that point, when Natalie and Peter posed the question, “Will I get type 1 diabetes?” instead of responding, “I don’t know,” I changed my response to, “If you do, we know what to do, right?” They seemed comforted by this answer and even went as far as talking about what kind of pump they would have if they had T1D and what kind of accessories they would ask me to order for them.

I was right not to get stressed out about Natalie getting T1D because 3 ½ weeks after we celebrated Jack’s 1st dia-versary, it was Peter that was diagnosed with type 1. He was a much different patient than Jack in every way. Whereas, Jack wanted to tell no one of his diagnosis, Peter wanted to call everyone from his hospital bed.

Peter  proudly wears his pump and his Dexcom on his arms with a sleeveless shirt. He doesn’t care who sees it or if someone asks about it. He even says that if there’s a cure for T1D, Jack can have it. Peter will keep type 1 so that we can still go to camp.

Four years into diagnosis, Jack is quite the opposite. He hides his devices under clothing and still doesn’t share his diabetes with friends. Two brothers, both with type 1, with very different experiences.

Then there’s the sister in the middle. My wonderful Natalie. The middle child, the only girl, and the only one without type 1. No cool devices and no cell phone. Every chance she gets, she counts carbs and asks to bolus the boys’ at meal time. They don’t know it, but she carries low supplies in her purse and in her backpack for them, just in case. She went through a phase where she carried an old Dexcom receiver around “pretending to have diabetes.” She’d say, “Mom, I’m 74 going slightly down. I think I should have a juice.” She likes to do air shots, she has her own meter, and her own log so she can track her blood sugar. Clearly, she feels left out. That was never more apparent than when she sat on Santa’s lap and told him she wanted type 1 diabetes for Christmas. I was overwhelmed with feelings of guilt. Natalie needed my attention and the way to get it was to have T1D like her brothers.

Occasionally I try talking the kids into a different summer trip. I’ve suggested Disneyland or the beach. Somewhere with a hotel. The thought of hot showers and drinks with umbrellas is enticing to this tired T1D mom. The kids say, “Our summer trip is Family Camp, mom!”  And they’re right. DYF camp is the right place for us. DYF supports my boys with type 1. Maybe more importantly, DYF is a special place for my daughter even though she doesn’t have T1D.

Are you ready to give the gift of camp? Donate today at DYF.org/donate.

This site uses Akismet to reduce spam. Learn how your comment data is processed.