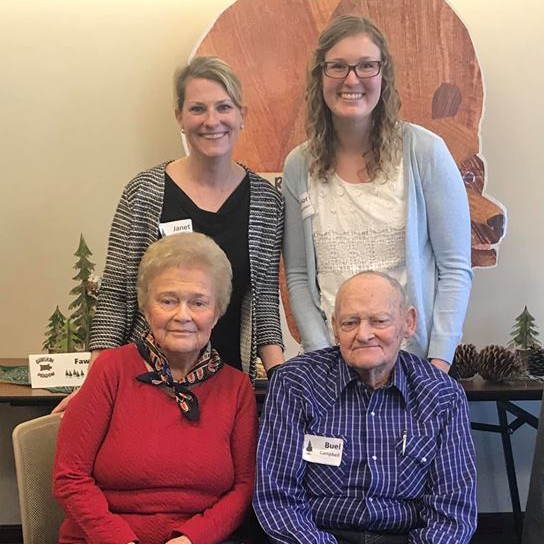 It’s hard to imagine a summer at Camp Whitaker in 1939. But some of us don’t have to imagine. Buel Campbell was diagnosed with type 1 diabetes in 1937 at the age of 6. Just 15 years after the discovery of insulin, relatively little was known at the time about diabetes management. Back then, children with type 1 would spend their summers in hospital wards, isolated from others their age. Fortunately, Buel was among the first to benefit from Dr. Mary Olney’s innovative wilderness camp vision.

A handful of diabetes camps opened across the country in the 1930’s, but they were little more than medical clinics in the woods. Doc’s version of camp was the first of its kind, implementing daily activities, rigorous exercise, and traditional camping practices. When Camp Whitaker opened in in 1939, Buel was among the first in attendance.

Now, at the age of  88, Buel looks back fondly on his time spent among the Sequoias. “I went every year! I maybe missed a summer here or there for whatever reason, but I attended until I went to college,” shared Buel. “I remember it all! I remember hiking, going on trips to Moro Rock, learning to keep my sugars low, all that stuff. I remember camp during WWII.”

From 1939 to 1950, Buel spent his summers with Doc and the campers at Camp Whitaker. When he was old enough, he became a counselor and started taking on more responsibilities. “One of the jobs I had at camp when I was a teenager was going to Visalia and picking up supplies in my pick-up truck. They used to pay a guy to do it, but Doc asked if it would work to use my truck, so it became my job. I’d get bread, meat, milk, eggs, stuff like that. I’d go to Baxter to get the mayo. One time I had to go into Fresno where the train depot was. Whoever was supposed to pick up the campers from the train didn’t do it, so I loaded over half a dozen kids in the back of my pickup and drove them up to camp. Doc wasn’t too happy about it, but it got the job done!”

His whole life, Buel has carried with him the mentality of camp and never let diabetes dictate how he lived. In 1950, Buel attended college in Davis to study animal husbandry so he could tend to his family’s sheep ranch. “After college, in my 20’s, I got into racing motorcycles. Me and my brother started herding sheep on motorcycles! I started racing more professionally, but I couldn’t too much because of the ranch.” They had 3,000 acres for which he was responsible. “It was hard work, a lot of physical labor. I’d just always carry sugar with me. You didn’t want to drop when working with animals!”

Today’s camps offered by DYF have evolved quite a bit from the camp Buel attended in 1939, but at their core they remain the same. We strive, everyday, to embody the values that Doc instilled years ago, teaching campers cutting edge diabetes management techniques, encouraging them to connect with nature and physically challenge themselves, and inspiring them to live their fullest lives with type 1 diabetes. It is our hope that our campers will keep the lessons they learned in mind and their camp memories in their hearts like Buel. “Doc really helped me a lot. Because of what I learned, diabetes was never too hard to handle.”

Do you want to gift a lifetime of lessons and memories like Buel’s? Send a Kid to Camp and empower a child to live a happy, healthy life with type 1 diabetes.